Recently I’ve gone through a series of events that lead to my children being taken from me.  After about two months of heartache, they were returned without incident.  However, during that time, I really gained a new appreciation for my role as “mother”.

All of our kids have been returned to us and it seems like things are finally settling down.  Or so I thought.

Tonight I bleached my oldest daughter’s hair.  She will be dying it a color named “Rose Quartz”.  I think back to when I was in 7th grade and my mom would only let me use Sun-In. 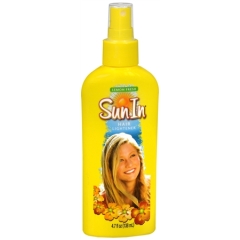 Which…let’s face it…was basically a placebo effect in a bottle.

I always wanted to be like my mother, but as my kids get older, I started to learn that it is okay for me to have my own rules and opinions about how to raise them.  My goal in raising my kids is to raise them to be respectful, responsible people.  However, I also like to nurture any talents or individuality they like to show.

My 7-year old is the sweetest girl in the world.  She loves arts and crafts and can turn trash into treasure.  She’s also my wild child when it comes to style.  She’s had faux hawks and undercuts and dyed her hair a bright (but natural) red.  She stands out.  And she loves it.

This is one of those things that is different from what my mother would have done.  For some reason, I was made to dress a certain way and I wasn’t really allowed to express my individuality.  Not because she was some kind of dictator, she just liked for us to dress nicely so we didn’t get made fun of in school.  And really, the thought just never crossed our minds until we got older.

I started by dying my hair blonde.  It wasn’t too extreme considering that was my original hair color until I got old and it got way darker.  But other than that, I didn’t even attempt to do anything else.  Immediately upon moving out though, I started with my piercing obsession.  Which ultimately lead to many piercings and then eventually tattoos.

Fuck.  I digress.  My point is that I want my kids to be able to express themselves.  Hair is hair.  It grows back.  If it turns out shitty, they’ve learned a lesson.

Moving forward with another parenting milestone that I never experienced with my mother.  My oldest daughter, we’ll call her N, showed me on her iPad that someone had been looking at pornography.  Several of my kids have iPads or iPhones or iPods or whatever.  But I had them all signed in under the same account.  N knew she hadn’t searched for those things and was really freaked out that someone had.

There was really only one other person who could have done it.  It was another one of my children.  Even though they weren’t home, I messaged them on Facebook and asked if they had done it.  At first they said they didn’t but after I told them that I wouldn’t be mad at them, they fessed up.  My next comment to them was that they needed to stop doing that but that we could talk about it and if they had any questions, I would answer them honestly. (I used they/them because the topic is kind of embarrassing so I don’t want to specify who it was.)

Crisis avoided.  However, this is uncharted waters for me.  My mom never had the sex talk with me.  Which is obvious by the fact that I had a child at 18.  My mom was far from neglectful though, let me make that clear.  I think it was just because I never sought out that type of conversation with her.  It just never came up, until she made an appointment for me to get birth control, but had to call back and change it to a prenatal appointment. *Insert yikes face here*

I’ve always tried to make it so that my kids understood that they could talk to me about literally anything. I don’t want them to feel shy or stupid.  I have absolutely no problem being honest with them about the way the world works, even if it’s something that might make me uncomfortable for a little while.

I’ll never live up to the amazing legacy my mom left me, but between the beautiful faces and well-spoken personalities that I have created, I think I’m doing pretty okay.

View all posts by bipolarmommyof5